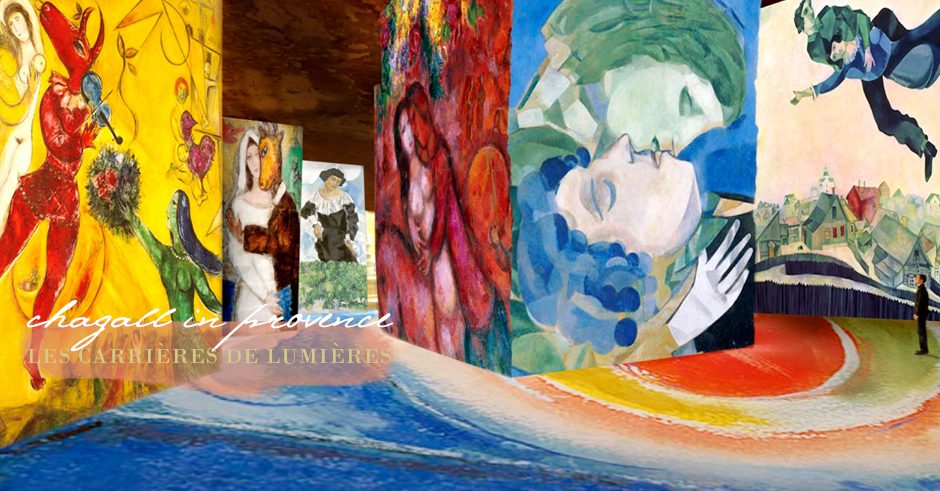 After welcoming over 513,000 visitors for Michelangelo, Leonardo de Vinci and Raphael: The Giants of the Renaissance, the Les Carrières de Lumières in Baux-de-Provence prepares to launch their next ambitious artistic project devoted solely to Marc Chagall (1887 – 1985).  The Chagall exhibit marks the first time a Les Carrières installation is devoted to only one artist and is set to begin March 4, 2016 continuing through January 8, 2017. This is a must-see for visitors and locals alike. Les Baux is a stunning daytrip destination in its own right and classified as one of the top 7 plus beaux villages of Provence. Combine a village visit and stunning venue to experience art for a guaranteed fabulous way to spend a day out exploring Provence.

“Produced by Culturespaces with the assistance of the Comité Marc Chagall, and created by Gianfranco Iannuzzi, Renato Gatto and Massimiliano Siccardi with the musical collaboration of Luca Longobardi, this new audio-visual show offers audiences a remarkable opportunity to discover the impressive oeuvre of Marc Chagall, an artist of Russian origin who obtained French nationality in 1937.

Most of the artist’s best-known masterpieces have been digitized and will be screened on the 5,000 m2 of the former stone quarry of Les Carrières de Lumières. A spectacular experience that promises to be a highly memorable one for the public! The first show focusing on a single artist at Les Carrières de Lumières, this new 2016 multimedia exhibition has been designed as a veritable journey through the major phases of the artist’s career.

Chagall: Midsummer Night’s Dreams is a story in twelve parts—Vitebsk, Life, Poetry, Collages, The War, Stained Glass, The Opéra Garnier, Daphnis and Chloé, Mosaics, The Circus, Illustrations and The Bible—presenting Chagall’s creativity in all its diversity, and his multiple sources of inspiration. The universal themes of love, the family, roots, the landscape, the circus, war, and music are perfectly showcased within the wonderful setting that are Les Carrières de Lumières.

For the first time, the close-ups of certain works featured in the collection of the Musée national Marc Chagall in Nice allow the visitor to see the artworks in a new light and to appreciate their depth and expressive richness. In addition to Chagall’s painted work, the show also reveals his collages, mosaics and stained glass windows, thereby illustrating the full range of Chagall’s talents. The show fills Les Carrières de Lumières with a sea of vibrant colours, characteristic of the artist’s palette, infusing the site with a poetic and particularly dynamic atmosphere.”